TS-Dates Review | Where Trans Women Meet Men Who Adore Them

TS-Dates (TSDates.com) is an online dating and personals. Website focused on pleasing transsexual and transgender adults—and equally mature people who are titillated by their presence and hold them, dear. It primarily spoils singles who are ready to mix, mingle, and make merry. Its doors are also open to couples and groups of three or more looking for polyamorous partying, especially with trans individuals.

Launched in 2011, the TS-Dates portal has been taking the trans dating world by storm since. With a population of 110 million (and counting), it’s now one of the most formidable and respected transsexuals and transgender dating sites on the planet. The site is translated into ten languages: English, French, Portuguese, Italian, German, Dutch, Swedish, Korean, Chinese, and Japanese.

TS-Dates is owned and operated by Various, Incorporated, a United States-headquartered company that has been sweeping the dating universe off its feet since 1996. Various is a subsidiary of FriendFinder Networks, Incorporated (FFN), which runs several colossal Websites, some with an app for people on the go. FFN’s spicy and sizzling list of assets on the World Wide Web includes AdultFriendFinder.com, Alt.com, Cams.com, NoStringsAttached.com, OutPersonals.com, and Passion.com.

TS-Dates is an online dating platform that plays its cyber-Cupid role really well. It primarily aims to please the world’s most terrific trans people, as well as their ardent admirers, although it caters to other types of adventure-seeking adults in the LGBTQIA+ and heterosexual spectra. The Website offers a splendid virtual meeting place for dating prospects who are up for over-the-moon hookups or down with lasting romances...or both.

The TSDates.com portal beams with diversity and inclusion, and it faithfully keeps a nonjudgmental atmosphere. It embraces mature trans and trans-loving women and men of all nationalities, ethnicities, and bedroom-experience levels. It ships intraracial and interracial intimacies, and it’s for anyone and everyone from any adult age group who’s at once passionate, playful, and properly behaving.

The humongous user base of LGBTQIA+ and heterosexual adults

Free sign-up, profile creation, and posting of photos and videos

Cons | Where TS-Dates Needs To Improve

No Android app or iOS app

Profile viewing is not free

A message reading and sending are not free

Payment in an auto-renew setting by default 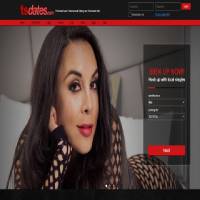 Joining TS-Dates doesn’t require a lot of effort, let alone any form of payment. Anyone can actually browse pages of the site as a guest, although being able to enjoy the features and functionalities requires registration. Signing up is free, but the use of premium services requires a paid subscription.

To create an account and proceed to climactic merriment with like-minded adults: 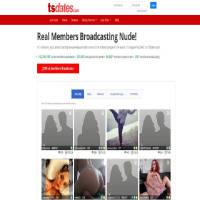 Members and Profiles | How Fascinating Are People on TS-Dates?

The transsexuals and transgenders that this incredible online dating platform welcomes with open arms are those who may or may have gone through female-to-male or male-to-female sexual reassignment surgery (SRS), as well as those who may or may not carry intentions of submitting to SRS at all. They’re the pre-operative (or “pre-op”), the post-operative (or “post-op”), and the non-operative (or “non-op”). Non-op trans women and men are those who have decided to retain their genitalia, as assigned at birth, even as they choose to dress and fully behave like the opposite sex.

As regards age, the Website’s population mainly consists of Generation Y’ers (or Millennials) and Gen Xers, although Gen Z’ers, Baby Boomers, and the Lucky Few are also part of the hale and the hearty hustle and bustle.

Being one of the best transgender and transsexual dating sites ever to hit the Internet, TS-Dates is pro-diversity and pro-inclusion. It’s nonjudgmental, too. The site prides itself on a subscriber base consisting of different races, creeds, cultures, and bedroom appetites.

TS-Dates draws on the power of superior technology that ensures the safety, security, and privacy of free users and paying members. It also relies on the competence of Website administrators that work round the clock to protect the system from cyber threats.

The site’s safety measures include:

TSDates.com has a dependable help desk that’s available 24/7 to address account-related safety, security, and privacy concerns. Customer support (called “Abuse Team”) will immediately review and deal with complaints against violators of the community guidelines or those showing offensive and abusive behavior.

The site warns honest-to-goodness-free users and paying members against spammers, scammers, and blackmailers. These elements create fake profiles and pass themselves off as the real McCoy to win bona fide subscribers over and steal their money and ruin their lives. There may also be sexual abusers, human traffickers, drug dealers, and other types of heinous criminals.

All subscribers are thus advised to use their common sense at all times, on the site or offline, and should never share their sensitive personal information with others. Personal information includes home or office address, credit card or debit card number, and bank details. No subscriber should ever send money to strangers

Review #1: Levi (United States) - TS-Dates is undoubtedly the best platform ever for trans women like myself and the trans-oriented men I want to hang out and hook up with. It doesn’t discriminate against people of color or people with traditional religious beliefs, and it’s open to singles, swinging couples, and polyamory groups. I’m what they call a “frum” person. I love dating African Americans, Asians, and Latinos, as much as I do Caucasians like myself. I’m not the type to settle down and stick to one, either, so I guess TSDates will work for me for a long time, whether I’m in my native California or elsewhere in the world. I’d download the app if there was already one available. I hope my review helps.

Review #2: Marguerite (Canada) - I am giving a positive review and a 10 out of 10 to TS Dates because of its great features and even greater customer service. As an omnisexual who can be comfortable around men and/or women in bed, I like that the site has plenty of like-minded subscribers in Edmonton, where I reside. I never run out of prospects, which means that I am practically never lonely. It would be nice to use an app, though, but the desktop and mobile sites are excellent enough and can satisfy my needs swiftly.

Review #3: Rolf (Germany) - My TS-Dates review is from a pansexual’s perspective, and I want others to know that the site is perfect for people who want “straight” people today and then trans people tomorrow. As far as I am concerned, TSDates.com always delivers good recommendations in my area (Berlin) or in many other big cities across Europe, Australia, Asia, Africa, and the Americas.

Costs and Pricing Plans | How Affordable Is TS-Dates?

Some services will not cost anything, but full site access will need a paid subscription.

The premium plans and their prices are:

There are add-ons that may be purchased, so it’s best to review the latest subscription policy on the site.

The services that standard or free users can experience are:

Use of search filters

The services that premium or paying members will enjoy are:

Enjoyment of all standard services

Is chatting a free service on TS-Dates?

Yes, there are “live model” chat rooms you can join without cost.

Does the TS-Dates site offer a free trial prior to a premium subscription?

No. But while there’s no free trial, a 3-day (or 72-hour) paid option is a great deal that lets you sample all features and functionalities.

How is it possible for me to verify my TS-Dates account?

Once you’ve completed the registration process, wait for the e-mail verification and click on the activation link in the message. When you upload your photo, the team will manually confirm that the image is yours and isn’t a misrepresentation of yourself.

Experts Conclusion | For Both the LGBTQIA+ and Heterosexual Communities

TS-Dates is the go-to site for trans adults, true. But the online adult network is also a vivacious virtual playground for non-trans women and men in the LGBTQIA+ and heterosexual dating sphere. Given a population bigger than that of countries like France, Germany, and the UK, it certainly is one of the most spectacular places on the World Wide Web to find and meet partners in lust and, if one gets lucky, in love.

We wanted to be part of the TSDates adventure, so we signed up. Before that, though, we read review after review we could find on the Internet and analyzed any first- or second-hand review we could gather.

As free users, we had an awesome time watching live-member cams. As paying members, we had an amazing time sending and replying to messages of people we wanted to interact with in person. On matters of safety, we did encounter a few persons who sounded decent at first...until they started asking for money (or they would shame us). Talk about shakedowns and silly people. We reported them to the Abuse Team that eventually booted them from the site.

Overall, we’re not surprised that we had an incredible experience on TSDates.com.